I spent a three-hour layover in the Los Angeles airport on my way from Seattle to Florida, to visit my ailing Grandmother. Approaching her 101st birthday, she came down with pneumonia and I wanted to get down there to see her again, knowing that in her vulnerable state, I should not take her time on Earth for granted.

I found an empty seat at the airport bar to sit at and watch the college national championship game between the Oregon Ducks and the Ohio State Buckeyes.

As you might imagine, I was flanked by liquor-soaked men, on either side of me who came from different parts of the country.

The gentleman to my right was a big guy with a hunting hat on, a denim vest with patches and tattoos. I noticed my own insecurity as what I would consider an obvious lesbian, wondering whether the men who surrounded me believed that my lifestyle would land me in hell, or if they would cool with the fact that I’m married to a woman.

Big dude on my right struck up a conversation with me about the game. He told me he hoped that I was for the Ducks. I told him I was more of a pro-football girl, but that I’d be happy if the Ducks won because I was from Seattle, and they seemed somewhat local. He was slurring his words a bit, but was nice enough and I felt mostly comfortable talking with him, given the unfamiliar atmosphere.

At some point I activated my phone, which caused the screen to light up and display my background photo, which is a stunning head shot of my dog “Chewy” who passed away several years ago.

My buddy next to me took one look and said “Awwww”, as he gazed into Chewy’s soulful expression.

“Now that’s what I’m talkin’ about”, he said as he rolled up his shirtsleeve.

He talked about shepherd mixes being the best and I explained how I thought Chew was a shepherd mix for twelve years and it wasn’t until we did a breed DNA test right before he died that I found out he was actually a lab mix. He had a very “shepherdy” look to him, so I just assumed he was a shepherd mix. Now that I look at him knowing he primarily lab, and also after living with my current male lab for the last few years, I can totally see the lab.

In any case, he admired Chewy and then rolled his right arm across his body to expose his wrist and forearm. On the rather large surface his bulky arm supported was a sweet memorial tattoo of his old dog, who looked to me some sort of “shepherd mix” as well. She was a pretty girl whose name I don’t remember, but it was etched under her portrait in a ribbon-like banner on his arm. He spoke so sweetly and fondly of her, and we shared the mutual experience of having loved a dog deeply and completely.

The football game ended, Ohio State won, and big guy pounded the rest of his last, of several, beers before departing the bar to catch his flight to wherever he was headed. I still had another couple of hours before my red-eye took off for Orlando, so I stayed at the bar and ordered some food.

Now with a vacant seat to my right, I ate my sandwich with a second glass of wine that I figured would help me sleep away my four and half hour red-eye flight.

It didn’t take long for the gentleman to my left to spark up a conversation with me and ask me where I was headed and where I was coming from. He was in his late fifties, and had bloodshot, but kind eyes. Heavy-set with gray hair and a puffy face, but a calm and comfortable, genuine presence.

He asked me what I do for a living and I told him I host a talk radio show all about dogs: The Dog Show with Julie Forbes.

“How cool is that?” he said, and then told me all about the dogs of his life. He was married twice, both marriages now over. In his first marriage he lived with a female shih tzu whom he adored. Her name was “April” and she lived to be sixteen or so years old. We talked about how smart they are, shih tzus, and he told me that she slept in the bed and that she knew how to get what she wanted.

He told me that he still has her ashes in an urn on his mantle and I pulled up a picture of Rainbow Bridge Hearts, a Seattle company that makes gorgeous glass-blown hearts and spheres with a swirl of your pet’s ashes that radiates from the center of the colorful piece. I told him it only took a teaspoon of your pet’s ashes to make a piece, so you didn’t have to forfeit your entire supply, in case he was inclined to ever do other things with Angel’s ashes. All you have to do is place your order and mail them your ashes and a few weeks later they mail you your piece. Of course, if you live locally, you can come a watch your pet’s piece be created – something I did when I had Chewy’s two pieces made.

We paused for a moment as this topic came to an end, then he started telling me about the border collie from his second marriage. This dog was more his (second) ex-wife’s dog and he told me about her quirks and challenges as a high energy, highly intelligent dog. When the marriage ended, so did his relationship with the dog and he shared with me how he’d love to have a dog but he travels too much for his job to have a dog.

We exchanged names, his was “Joe”, and we shook hands. I asked him about his job and I learned that he is a broker in the market of natural foods and represents companies to distributors and large accounts that they would otherwise have a hard time connecting with. Joe lives in South Carolina and just at a trade show in California. He travels to trade shows often, and this is why he can’t have a dog.

A woman walked by us with a little dog in a vest identifying it as a “service dog”, something that raises eyebrows now because of how some people really abuse this right just to get their dog on a plane.

Joe said, “Y’know, call me what you want, but sometimes I feel bad for the dogs in vests. I wonder if they are happy with such a high expectation and a lot of pressure on them from their humans to work.” He was clearly sheepish in expressing his concern, and I told him that he was absolutely right to be sensitive to the dog’s experience and that it was a massively underrepresented topic – that of service dog welfare.

This is a topic that my wife, Darcie Boltz, is passionate about; as an expert in the service dog industry, and a topic I’ve discussed on my radio shot more than once. It takes a very specific kind of temperament and personality for a dog to truly be a successful service dog. Not just successful in it’s tasks, but successful in the sense that the dog is happy in the role. Both extremely important to consider. Would the dog have signed up for this if it were up to him or her? They don’t get to say either way, and too many times dogs who are not a good fit for the job are forced into it. I see them totally stressed out in public and it isn’t fair.

I was impressed with Joe’s sensitivity to the issue and we shared our agreement on the matter.

My time at the bar passed quickly “talking dog” with my neighbors and I felt refreshed from the positive experience.

Spending time get acquainted face-to-face with strangers, randomly, isn’t something we practice too much anymore. I felt also present to how powerful our love of dogs can be, and how two people with seemingly little in common can easily and instantly connect around their love of dogs.

Dogs touch us so tenderly and deeply and there is an instant comfort we can find with each other when we recognize the mutual sensitivity we share of the bond between human canine.

Dogs help us in so many ways to connect us with ourselves, if we are open. They also facilitate connection with other people.

The Dog Show with Julie Forbes

Listen to The Dog Show with Julie Forbes, live, Wednesdays from 2:00-3:00pm on Alternative Talk 1150 AM. Also streaming live on www.1150kknw.com and www.blogtalkradio.com. Download for free from iTunes anytime or listen from the Pawdcasts page on this site, too! 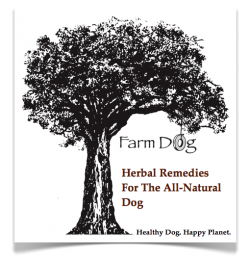 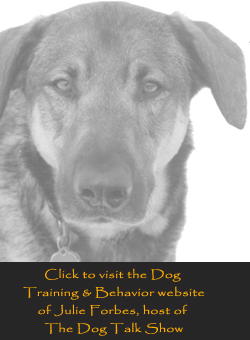 Have a Show Idea?

Submit your question or dog topic and Julie may feature it (and you) on her >next show.

Want to hire Julie? Find out about the services Julie offers.